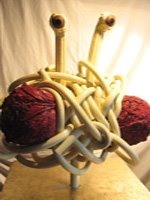 For those that don't know, Pastafarianism is the understanding that the entire universe was created by a flying spaghetti monster.  These people have made a statue as a shrine to worship.  (he he)  Originally a poke at organized religion, the Flying Spaghetti Monster has taken hold as a spoof belief structure in that it is no more or less feasible than any other monotheism.  Think what you want, but the statue is great.  They tour it all over a county.